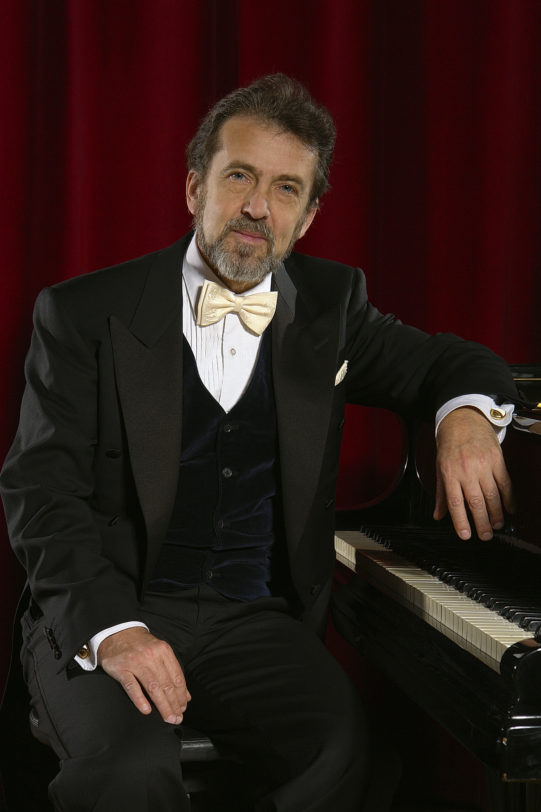 KONSTANTIN VILENSKY is a composer, classic and jazz-pianist, professor of piano, harmony and orchestration. He is a member of the Union of Composers of USSR from 1984. Since 1991 – member of the Union of Composers of Ukraine. Member of the Russian Authors Society (Moscow). He was born in the family with the great music traditions. His grandfather, composer Ilya Vilensky was the first director of Philharmonic Society and organizer 3 dramatics theatres in Kiev. Famous artists visited their home like Vladimir Horovitz and Henryk Neuhaus. K.Vilensky graduated from Kiev State Conservatoire and completed post-graduate course. His professors were A.Shtogarenko (composition), R.Lysenko (piano). At that time he had consulted with well-known composers such as Rodion Shtchedrin, Aram Hatchaturian. From 1983 to 1995 he has taught harmony, orchestration and improvisation at the Kiev State Conservatoire. He is a composer and concert pianist virtuoso with a talent for combining classical and jazz performing practice. He plays and writes various kinds of music, from vocal-symphonic and symphonic to theatre, chamber and jazz music. He has given concert with such outstanding orchestras as the Royal Orchestra in Brussels, Jerusalem Symphony, Moscow Philharmonic. K.Vilensky has won numerous prizes at international music festivals such as: „Polish Classic 98” (Opole), Jewish Music Festival (London, July, 92, Jerusalem, August, 96) – the kind of composer, GOLOSEJEVO 88(Kiev), XI International Moscow Festival, SOLO-DUO-TRIO (Krakow,1989), „Falsterbo International Music Festival”. He performed Beethoven’s B major concerto for piano and orchestra in Falsterbo, Sweden, July 1998. He has made many radio and television appearances and recorded twelve discs – „Lunnyj serp” Melodiya, Moscow (1986), „All the things you are” Melodiya, Moscow (1988), „JAZZ Trio Duet Solo” KOHC (2001), „Konstantin Vilensky Works for Piano” (KOHC,2001) „Flute in love” (print in Israel 2003), „Bolling Vilensky” (Polish Radio, Warsaw, 2004), „Scott Joplin Ragtimes” (Radio Gdansk, Gdansk, 2005), „Mozart-Blues” (Israel,2008), K.Vilensky „Kashubian Suite” (Dziennik Bałtycki, 2018), „Classical Meets Jazz” (Soliton, 2019), „Solo” (Soliton, 2020), „Swinging Christmas” (Soliton, 2020). Since 1996-2001 K.Vilensky has been music director of dramatic theatre by Stefan Zeromski (Kielce,Poland). He is author of the musical „Kopciuszek” („Cinderella”), chosen by the public as the best performance in 1997 such as „King Lear” in 2001. Music of the poems by A.Mickiewicz – „Ballads and romantic songs”, which received high praise by critics both in London (Premiere was in London, February 1998) and Poland („Polish Classic 1998”, Opole, March-April 1998). Being the kind of piano composer he is, he has received great acknowledgement over the last couple of years by many famous pianists all over the world. Many pianists in various countries have played piano compositions by K.Vilensky. His most popular piano compositions such as: “SONATA” for piano … The step between works by the living Vilensky and the highly romantic Franz List, who died in 1886, was actually rather short. Both of them excels in difficult and heavy passages which require great technique and well developed musical competence. MASTERLY PIANO PERFORMANCE AT THE MARINE MUZEUM , Jane Betts BLT (Blekinge Läns Tidning) 29 august 1997 SWEDEN. VARIATIONS ON THE THEME BY PAGANINI” for piano, jazz-trio & symphony orchestra, “THE DEVIL’S DANCE” for two pianos, “CONCERT-FANTASY ON THE THEMES BY GERSHWIN” for piano, jazz-trio and symphony orchestra. One of his works is the treatment for piano of „THE FLIGHT OF THE BUMBLE BEE” by Rymski-Korsakov. In a short time, this work became very popular in many countries. Attraction of the creations by K.Vilensky consists of a combination of classic and jazz. The attractiveness of Konstantin Vilensky’s musical oeuvre lies in the symbiosis that he achieves between classical and jazz music. Today, this musician’s ambition is to build bridges between jazz and classical music. This is what distinguishes him from among the majority of ”very serious” composers and what makes for his originality … (Ruch Muzyczny, Poland, 19th March 2000).